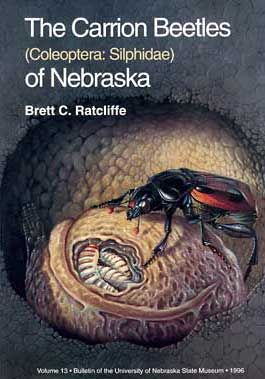 A faunal survey of the carrion beetles of Nebraska (and, by extension, surrounding states) is presented. An overview of the family and its two subfamilies is given as well as keys to the adults and, when known, the larvae. Each of the six genera and 18 species is reviewed. All but four of the U.S. species of Nicrophorus are included. The treatment for each species consists of synonymy, diagnosis, distribution in general, Nebraska locality records, temporal distribution, and remarks. The remarks include commentary on how to best distinguish the adults, references to the larval stages, and a discussion of biology and ecology. An extensive discussion on nicrophorine biology is included as well as the latest information on the occurrence of the endangered American burying beetle in Nebraska.

Distribution maps, showing Nebraska county records, are given for all the species. A habitus drawing (some in color) for each species is provided along with line drawings of particular characters to supplement the taxonomic keys. There are 120 illustrations. An extensive bibliography and a glossary are also included.