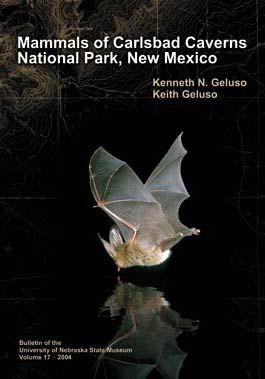 Carlsbad Cavern was established as a national park in 1930. Eighty-eight percent of the park lies in the rugged Guadalupe Mountains, while 12% is located on relatively flat land along the base of the mountains. The park contains a variety of habitats ranging from desert scrub at the lowest elevations to coniferous woodlands on the highest summits.

The results of a 7-year survey for mammals are the basis for the present volume. In recent years (1949-2000), 63 species of mammals (excluding humans and their domestic animals) have been documented in the park-1 shrew, 15 bats, 2 lagomorphs, 27 rodents, 13 carnivores, and 5 ungulates. The present volume includes a descriptive narrative for each of the 63 contemporary species of mammals. There are also accounts for five species that were extirpated during the past 150 years and for another 11 species with uncertain status. For contemporary species, accounts include detailed information on habitat, reproduction, and collection localities. A distribution map also is available for most species.