Tapeworms of Elasmobranchs (Part II) A Monograph on the Diphyllidea (Platyhelminthes, Cestoda) 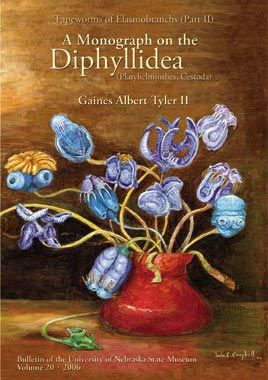 This monograph is a synthesis of the diversity, systematics, host associations, and biogeography of the Diphyllidea. A thorough review of the literature resulted in the transfer of Diagonobothrium into Diphyllidea as a genus inquirendum. The genus Yogeshwaria was transferred to Diphyllidea as a synonym of Echinobothrium. Its only species, E. nagabhushanin. comb., is considered to be a species inquirenda. New collections resulted in the description of a new species of Echinobothrium. Type and/or voucher specimens for 32 of 36 valid diphyllidean species (including the new species) were examined using light microscopy and scanning electron microscopy. All 32 species examined were redescribed and figured. This work resulted in the elucidation of 55 morphological characters that were employed in cladistic analyses involving 34 diphyllidean and seven outgroup species. The most parsimonious trees resulting from these analyses support Ditrachybothridium as a monophyletic taxon. All three species formerly assigned to Macrobothridium appeared among species of Echinobothrium. Thus, Echinobothrium is paraphyletic if Macrobothridium is excluded. As a consequence, Macrobothridium is synonymized with Echinobothrium, and its constituent species transferred to the latter genus. The trees obtained from these analyses failed to recover any of the topology of the only previously published phylogeny of the order. A comparison of the tree resulting from the phylogenetic analyses among the diphyllideans to a composite tree of the relationships among batoid genera known to host Echinobothrium suggests that strict coevolution between the elasmobranchs and their diphyllidean tapeworms is unlikely to have occurred. However, because the sampling of potential elasmobranch hosts has not been comprehensive, this conclusion is considered preliminary.