The Dynastine Scarab Beetles of the USA and Canada
(Coleoptera: Scarabaeidae: Dynastinae) 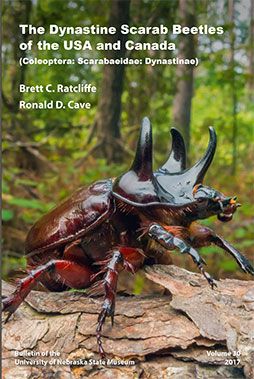 The 61 species and two subspecies of dynastine scarab beetles that occur in the United States of America (including Guam) and Canada are comprehensively reviewed. This is the fifth volume in the series that documents the scarab beetle subfamily Dynastinae from Panama to Canada. Detailed discussions of historical collecting, people, climate, vegetation, and habitats (with images) are presented. Keys to all tribes, genera, and species in the study area are given. Descriptions, recorded geographic localities and temporal distributions, diagnoses, notes on natural history, illustrations, and distribution maps are provided for all species. Also included are synopses of the higher-level taxa of the subfamily in the region, a glossary, and a species checklist.

To Order: Print the order form and return by email to:

Price: Prices of publications are subject to change without notice.