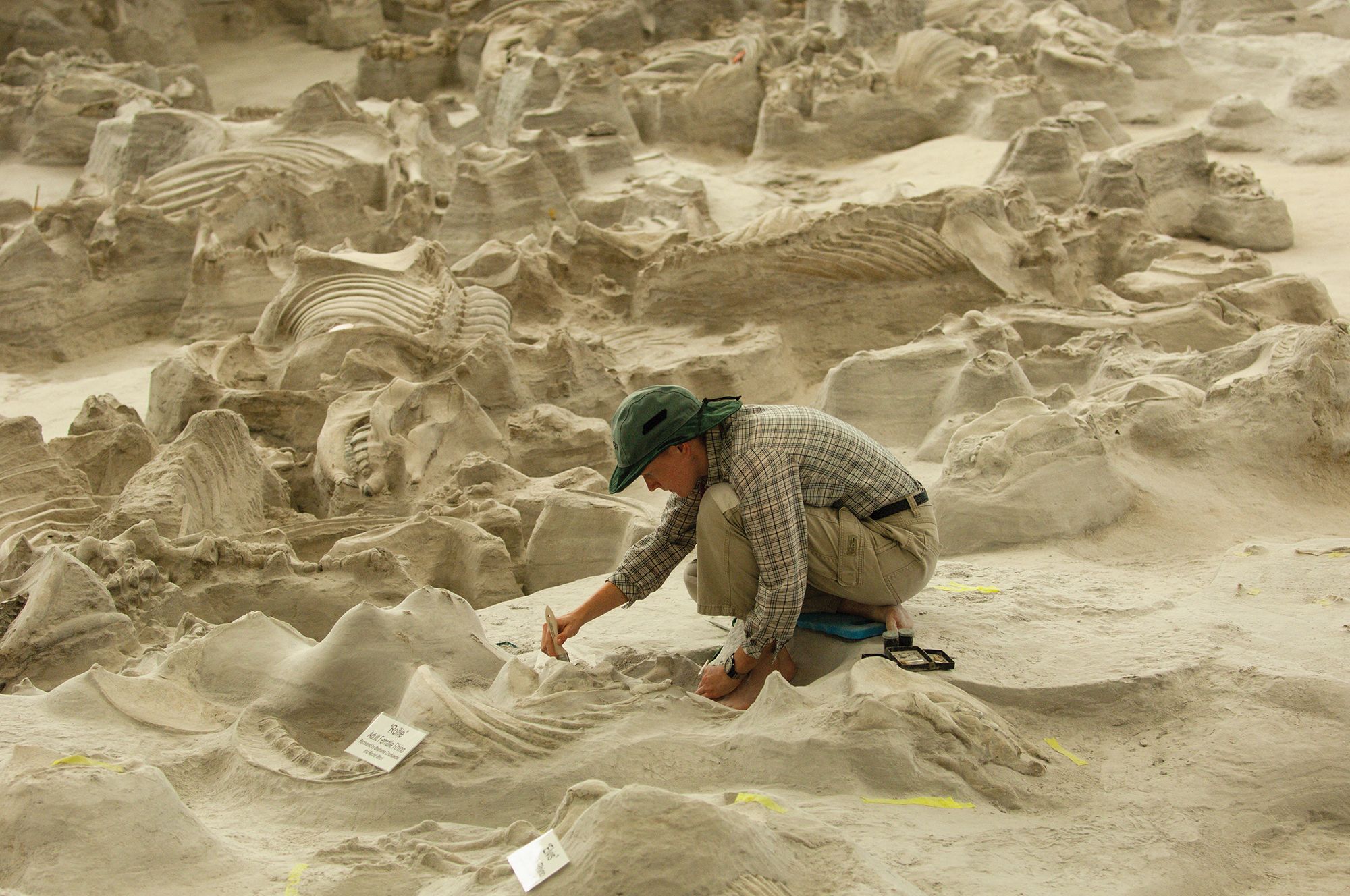 Life and Death at a Nebraska Waterhole

Hundreds of skeletons of prehistoric animals have been found in a volcanic ash bed buried beneath the rolling farmlands of northeastern Nebraska. Some of the best-preserved fossil rhinos, horses, camels, and birds known anywhere have been, and are being, excavated by museum crews working in the Ashfall Fossil Beds in northern Antelope County. Unlike most fossil deposits, which consist of scattered bones accumulated over extended periods of time, the ash bed contains mostly articulated remains with bones still joined together in the proper order.Quick burial in volcanic ash accounts for the three-dimensional preservation of the skeletons of species that became extinct millions of years before they could have been seen by humans. These remarkably lifelike skeletons, some of which contain unborn young and stomach contents, give paleontologists an opportunity to reconstruct the life appearance and habits of these ancient species with an accuracy never before attainable. 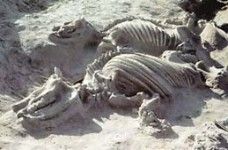 The ash bed also contains abundant additional clues to the vegetation and climate of the landscape in which the rhinos and other animals lived and died. It is truly a 'time capsule' presenting us with a picture of a vanished world unrivaled in detail and clarity. This pamphlet describes some of the highlights of the first two decades of exploration of the site. It also invites you, the reader, to experience a sense of discovery of Nebraska's deep past by visiting the locality, which is now open to the public five months each year.

Nebraska's newest state park, Ashfall Fossil Beds State Historical Park, opened its gates on June 1, 1991. Located 6 miles north of U.S. Highway 20 between Royal and Orchard, the park is a joint project of the University of Nebraska State Museum and the Nebraska Game and Parks Commission. Two buildings have been constructed at the site: a Visitor Center featuring interpretive displays and a working fossil preparation laboratory and a Rhino Barn covering a portion of the fossil-bearing ash bed. Each summer paleontologists working in the Rhino Barn will continue to expose skeletons buried in the ash. The newly uncovered fossils are being left exactly as they are found. Specially constructed walkways afford visitors an unobstructed, close-up view of the paleontologists at work. When the entire 2000-square-foot area within the Rhino Barn has been excavated, plans call for extending the building to cover more of the fossil bed, only a small fraction of which is currently protected by a roof.

The first indication that a fossil bed of major significance might lie buried on Melvin Colson's farm came to light during the summer of 1971 when I noticed the skull of a baby rhinoceros eroding from the wall of a ravine at the edge of a cornfield on Mr. Colson's property. What made the find so unusual was that the skull and lower jaws were in perfect articulation and that the fossil was completely embedded in soft, distinctly layered volcanic ash.

I had originally visited the Colson farm in 1969 as part of a long term study of the geology and paleontology of the Verdigre valley. Verdigre Creek and its many tributaries have carved nearly 500 square miles of Knox, Antelope, and Holt counties into a network of rugged hills and ravines. My wife, Jane, and I located and mapped more than 200 fossil-producing sites in this area between 1968 and 1975. What drew us to the Colson farm was a cliff nearly 100 feet high with a layer of very hard sandstone at the top. Like previous generations of fossil hunters we had learned to expect bones in this particular sandstone, known to geologists as the Cap Rock.

Jane and I found a few fragmentary fossils on our first visit--nothing exciting but enough to prompt return trips in succeeding years. Our attention eventually shifted away from the high cliff to a series of less spectacular outcrops that trickled through Mr. Colson's pasture. It was here, on a deeply gullied hillside recently swept free of soil and debris by torrential rains, that a routine afternoon of prospecting turned into a once-in-a-lifetime adventure.

Excitedly, I brushed the ash away from the little skull, first from the oversized teeth, then farther back, looking for evidence that the rest of the skeleton might be there. It was. Just as the old song has it:

"The head bone connected to the neck bone,

the neck bone connected to the back bone,

the back bone connected to the hip bone..."

Not only did this first rhino turn out to be intact but other equally good skeletons seemed to be extending back into the hill, covered by ten to twenty feet of ash and sandstone. Although it was difficult to resist the impulse to dig straight back into the ash bed and see what else was there, past experience had taught me that this would not only have endangered the fossils (and maybe the digger!) but also would have destroyed important evidence about the origin of the deposit.

Because of the unusual nature of the site, special care had to be taken in exploring it. Before any extensive digging could be done, it was necessary to learn as much as possible about the geologic relationships of the fossil-bearing bed. A series of shallow pits excavated with a trowel revealed far too large an area to be worked by one person. In order to obtain funding for a large-scale excavation I needed to document the extent and significance of the deposit so in June 1977 a small crew from the Museum helped me shovel off the overburden from 20 square meters of the fossil bed and collect several skeletons.

The National Geographic Society agreed to support a larger-scale excavation of the site when I sent them photographs and descriptions of the 1977 test excavation which showed that skeletons of horses as well as rhinos (one containing a fetus) were present in the deposit. With funding from the Society I was able to hire a crew of eight students and spend the summers of 1978 and 1979 excavation the ash bed. With Mr. Colson's permission we had a bulldozer gradually remove the sandstone and upper part of the ash bed over an area of about 600 square meters adjacent to our 1977 test excavation. (First, of course, we probed these upper beds to make sure they contained no fossils!)

After gridding the bulldozed area into a series of 3 by 3 meter squares we began to carefully remove the remaining (lower) portion of the ash bed where the skeletons, we believed, should lie. The results exceeded even our most optimistic expectations. Not only did we find dozens of additional rhinoceros and horse skeletons but also remains of camels, birds, turtles, and small saber-toothed deer. It became clear that a major disaster, claiming hundreds of victims, had occurred at the site.

As excavation proceeded through the summer months of 1978 and again in 1979 the museum team collected any and all kinds of information that might help us understand the origin of this deposit, apparently the only one of its kind in the world. Like detectives at the scene of a crime we paid special attention to the position of the bodies--photographing and sketching each one before encasing it in a plaster cast and removing it to the laboratory for further analysis.

It became clear early on that there was a definite pattern to the arrangement of the skeletons in the ash bed. Digging down from the top we always found rhinoceroses first, then, at deeper levels, smaller hoofed animals such as horses and camels, and finally, birds and turtles. The latter were always at the very bottom of the ash bed, in a layer containing numerous footprints of rhinos and other hoofed animals. It seemed evident that the small creatures died first, then the middle-sized ones, and finally, the rhinos. The animals definitely did not die all at once; they were not (with the possible exception of the birds and turtles) buried alive.

The larger animals clearly died more slowly, over a period of a few days to a few weeks. Proof that they were not instantaneously killed and buried can be seen on many skeletons, especially those of horses and camels, which often show bite marks attributed to large scavengers that must have had access to the carcasses before they were completely buried. Every fossil mammal so far discovered at the site has abnormal patches of highly porous superficial bone on various parts of its skeleton, especially on the lower jaw and the shafts of the major limb bones and ribs. Veterinarians have reported very similar growths on animals that have died of lung failure. Inhalation of large amounts of volcanic ash almost certainly caused the deaths of the Ashfall victims.