This map depicts the vegetation as it was before European settlement, in the 1860s.  It was developed mostly from field observations of remnants of native vegetation. 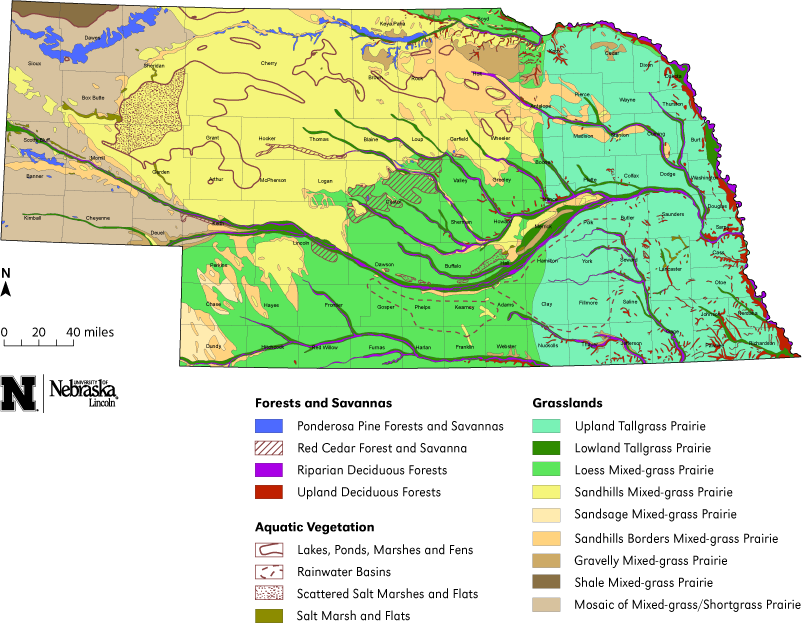 1. Ponderosa pine forests and savannas:  Ponderosa pine and associated deciduous trees and shrubs, with prairie species on exposed ridges and among the trees in savannas.

2. Red cedar forests and savannas:  Red cedar is common over most of the state and is extremely invasive in prairies and rangelands in the absence of fire. The map shows some naturally fire-protected places that have extensive forests of large, old trees. Suppression of ﬁre has led to troublesome increases of red cedar in many places.

3. Riparian forests:  Open woodlands and dense forests on valley ﬂoors. Forests are especially dense in the Missouri, Platte, lower Loup, and lower Republican River valleys. There was a substantial 20th Century increase in riparian woodlands in smaller valleys because prairie ﬁres are suppressed. Controlled and reduced ﬂows of the Missouri, Platte, and Republican rivers now bring stability to the ﬂoodplains, resulting in dramatic increases in woody vegetation.

4. Upland deciduous forests:  The oak-hickory forests of the Midwest reach their western limits in eastern and northern Nebraska. They are mostly confined to the slopes of valleys and are richest in species in the southeastern part of the state. In the Niobrara River valley, they abut the ponderosa pine forests of the west. In some forests of eastern counties, aggressive alien herbs and shrubs are invading in large numbers.

The major areas of aquatic vegetation are outlined. The Sandhills lakes are richest in species and numbers of individuals, while artiﬁcial ponds and reservoirs have fewer or none. Major streams, especially those on heavy soils, have submersed and emergent vegetation in quiet backwaters, but channelization, siltation, and pollution have eliminated much of it. Minor streams, especially in the Sandhills, have more vegetation.

5. Sandhills lakes, ponds, marshes, and fens in valleys between the dunes and in sandplains. Many waters are neutral to slightly alkaline, especially in the eastern Sandhills, and they are usually dense with emergent and submerged vegetation of numerous species. Others are strongly alkaline or saline, especially in Garden and Sheridan counties, and their species are fewer and the vegetation less dense. The numerous clear, steady flowing streams often have luxuriant growth of submersed plants.

Sedge and grass-ﬁlled fens, particularly those in Cherry County, are sustained by accumulations of sedge-peat. Plants more typical of cooler northern bogs are commonly found in these fens.

6. Rainwater basins are in two large areas south of the Platte River, with numerous shallow, permanent and intermittent ponds and marshes on level, rich, ﬁne soils. Areas of small basins are also in Chase, Keith, Lincoln, and Perkins counties. The emergent shoreline vegetation of the permanent waters is often dense, but submersed vegetation is sparse

Most of the basins were drained and plowed for agriculture by mid-20th Century. About ten-percent remain and are now protected as havens for migrating waterfowl, whose spring migration brings millions of ducks and geese.

7. Scattered salt marshes and salt ﬂats in the Platte Valley and western Sandhills.

8. Salt marshes and salt ﬂats:  Saline marshes, ponds, and flats are subject to summer drying. The vegetation is patchy and there are large expanses of bare soil that are often white with encrusted salts when dry. Until the late 20th Century, these areas were considered worthless and were treated accordingly; now, some have been preserved.

9. Upland tall-grass prairies:  The original luxuriant, perennial, sod-forming and bunchgrasses on uplands in the eastern third of the state are now mostly eliminated by agrarian activities. Fragments of virgin prairie remain in areas too steep to plow, in odd corners unsuited for cropland, and in railroad rights-of-way. Forbs are numerous and conspicuous. Species diversity is maintained by occasional burning, which stimulates the native species but harms the aggressive, introduced ones such as musk thistle, Kentucky bluegrass, and smooth brome-grass.

10. Lowland tall-grass prairies are on moist, level ﬂoors of the major river valleys and some of their tributaries, and extend far west of the upland tallgrass prairies. Vegetation is dense and often luxuriant. These areas of richer, moister soils are mostly converted to cropland or mowed and grazed, and there is considerable invasion by trees and shrubs.

11. Loess mixed-grass prairie on loess soils. The vegetation is rather dense, and the ground is not usually visible among the plants. The prairies are almost entirely converted to cropland in level areas and to rangeland in more dissected terrain.

12. Sandhills mixed-grass prairie on ﬁne sands of the dunes and level places between them. Tall and short rhizomatous and bunchgrasses and many forbs are present, and the vegetation is not as dense as in adjacent tall-grass and mixed-grass prairies. The area is less disturbed than other prairie zones and has fewer weeks and little cropland.

13. Sandsage mixed-grass prairie on sand dunes and sand plains in the southwestern counties. The vegetation resemble Sandhills (6b) but has substantial growth of sand sagebrush, Artemisia ﬁlifolia, which is absent from most of the Sandhills proper.

14. Sandhills borders mixed-grass prairie has a mixture of Sandhills (6b) and sandsage (6c) species with those of adjacent prairies and grows on non-gravelly soils intermediate with the Sandhills sands and other soils. Species restricted to pure sand or to non-sandy soils are absent.

15. Gravelly mixed-grass prairies grow on infertile, extremely well-drained, sandy-gravelly soils, usually on slopes. The plants are rather sparsely spaced. Some Sandhills species are here, as are some not otherwise found in sandy prairies.

16. Shale mixed-grass prairies exist on clay formed from weathered shale. The vegetation is sparse and some areas have none. Bunch- and rhizomatous grasses are abundant, as are big sagebrush, rabbitbrush, and winterfat; forb species are few but common.