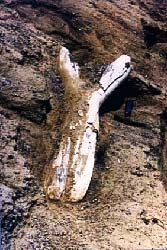 In June, we received a call from Mike Spaeth of Cheyenne County, reporting the discovery of a large fossil bone protruding from a stream bank. Despite initial communication problems, I made arrangements to investigate his find over the 4th of July weekend.

Before driving to the site, Mike related the story of his discovery: "My son Josh and I were out checking cattle following a heavy rain when we noticed a large white object in a stream bank (almost a half mile away). Maybe it's a dinosaur bone! After a little digging, we realized that it was a gigantic petrified bone, so we reburied it and called the university."

We arrived at the locality a short while later, clambered up the slope, and uncovered not a dinosaur bone, but a complete lower jaw of the four-tusked elephant Amebelodon! Truly a magnificent specimen! That afternoon, soon after I began uncovering the mandible, I discovered the associated skull, making this an incredibly rare and important specimen. 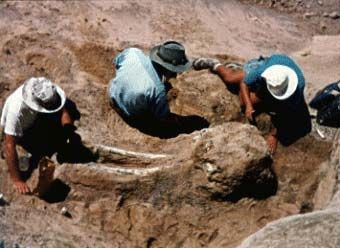 The Spaeth children, Anna, Josh, and Zack, assisted with the excavation and thoroughly enjoyed covering the jaw with a protective jacket of burlap and plaster. That night, over a delicious T-bone steak feast, we made arrangements for my return, for I hadn't brought enough materials to remove a complete elephant skull and lower jaw.

The first week in August, I returned with Cinda Timperley and Mike and Jane Voorhies. We successfully removed the complete 350+ pound skull in three days. The second night out, a violent thunderstorm flattened our camp, but the warm hospitality and enthusiastic assistance of the Spaeth family made this excavation easy and enjoyable.

The Division of Vertebrate Paleontology thanks the Spaeth Family for donating this unique specimen and for all the courtesies extended to the Museum field party. Important specimens of this kind would be lost to science without this kind of cooperation.

Editor's note: This is the first skull, and only the second complete jaw (the first was collected in 1927) of Amebelodon known from Nebraska. 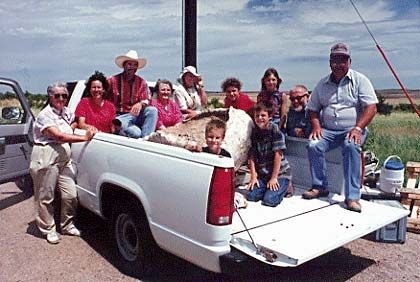