During April and May, UNSM paleontologists were well-occupied with the excavation of a fossil proboscidean, Stegomastodon, from a site in Hitchcock County, near Trenton, Nebraska. In this effort Mike and Jane Voorhies were assisted by many Museum staff, two of our regular volunteers (Marv Hix and Doris Johnson), numerous volunteers from the Trenton area, and UNL graduate and undergraduate students. This generously-sized labor force not only enabled us to efficiently remove the skeleton, but also to guide a steady stream of school groups through the site while work progressed. Over a two-week interval, approximately 1,000 visitors were received.

Map of the Williams Stegomastodon Quarry, May 1997

From our standpoint, his site of death could not have been more fortuitous. He had selected a spot that 1,300,000 years hence would be located on the property of an especially keen-sighted and conscientious rancher, within 1/8 mile of a large metal storage barn, 1/4 mile of a paved road, 1 1/2 miles of a professional crane operator, and within 2 miles of Trenton. Well done, good elephant! And as if pre-ordained, the citizens of Trenton and its outlying areas were uncommonly ready for such a discovery. They assisted us in every way, and showed a remarkable enthusiasm for discovery, patient observation, education, and inquiry. The school classes visiting the site were not merely "under control," but courteous and involved. We enjoyed having the students work our screen tables, and they were reluctant to leave. It happened that all of the community – not only the landowner – took pride in their Stegomastodon. Perhaps not every town would so naturally assume its stewardship role in preserving Nebraska’s fossils, nor so readily support a museum 300 miles away.

As a result, this was a restoring time for us all. And it will continue to be, as we begin the careful conservation work in the lab. It is expected that an exhibit documenting the excavation and displaying some of the Stegomastodon bones will be completed by December. 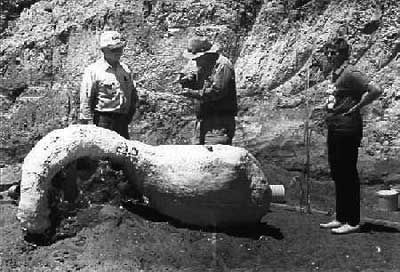 Stegomastodon (not to be confused with the American mastodon, Mammut americanum) was the last surviving member of a lineage of primitive tuskers called "gomphotheres" which first entered North America 15 million years ago. By 1.3 million years ago (the approximate age of the Trenton site), these marvelous animals had all but disappeared from North America, supplanted by a recent immigrant to the new world, the mammoth (a modern, true elephant). Indeed, the Trenton Stegomastodon was one of the very last of its kind, and for this reason it is of special scientific interest.

You would have immediately recognized a stegomastodont – had you the chance – by its burly, robust shape (neither as lithe nor as tall as an African elephant), by its broad, upward-curving tusks, and by a profile that was lower to the ground, and more tank-like, than any mastodon or elephant.

So now imagine a day, 1,300,000 years ago, when an elderly and ponderous male Stegomastodon gives up its last breath, his enormous weight pressing down upon a sandy riverside strand. Perhaps the last sound the creature hears is the steady lapping of a wide, easy-flowing river just a short distance away . . . what today (in much diminished form) is the Republican River of southern Nebraska.