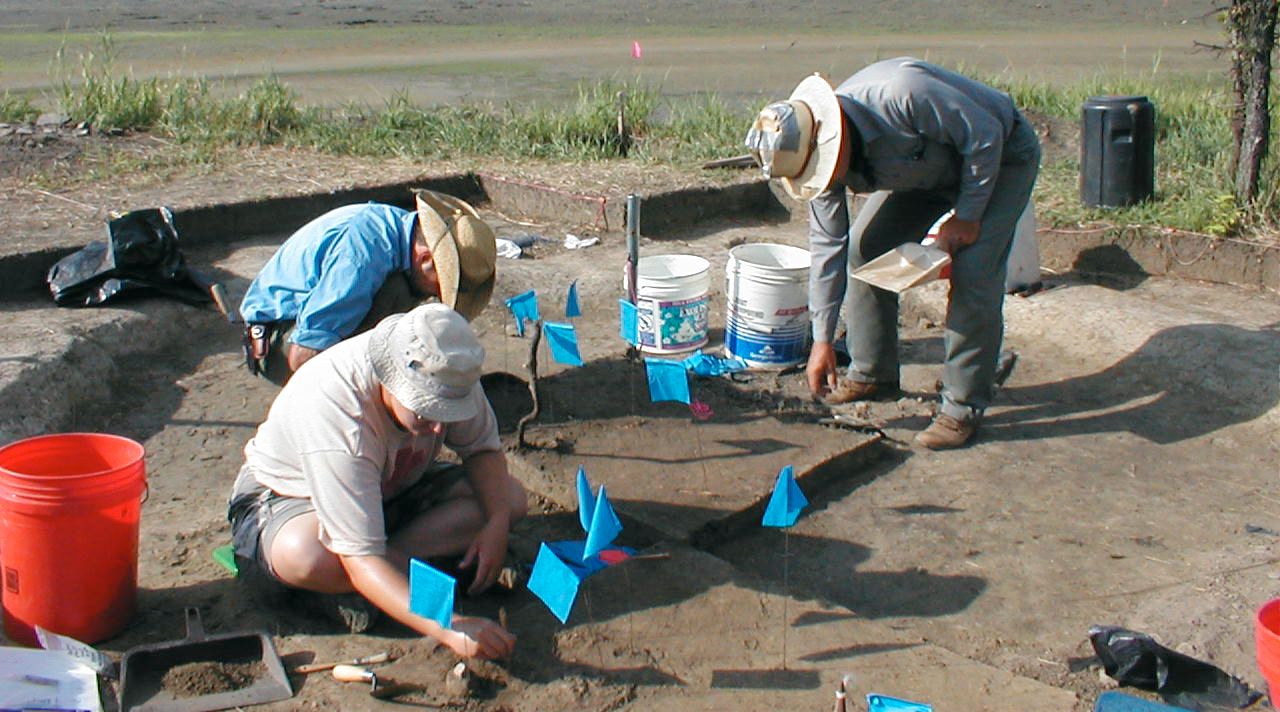 Riding Out a Mega-drought in the Prehistoric Central Plains?

During the summer months, we frequently read brief newspaper articles that describe various archaeological discoveries in Nebraska, North America, or in a “far and distant” land. Such newsworthy accounts detail finds of ancient stone tools found with extinct animal bones, artifact-rich village sites buried beneath volcanic ash, or, as we have seen recently, well-preserved paddle-wheel steamboats that have emerged from dry river beds. We are less likely to hear about seemingly more mundane discoveries that are typical of our work as archaeologists. So, one might ask, “Why would archaeologists ever be interested in excavating a relatively small, nondescript site that would almost certainly contain few ‘treasures’ ?”

This particular story of discovery began during the early fall 1997 when a small archaeological crew consisting of Dr. Steve Holen, Danial Watson, and Elsa Pierce from the University of Nebraska State Museum found historic and prehistoric artifacts along the muddy shores of Sherman Reservoir near Loup City, Nebraska. Fragments of ceramic vessels, chipped stone tools, flint flakes, and animals bones suggested that the nearby hill slope concealed a prehistoric camp or village. The archaeologists were somewhat surprised, however, to find the tell-tale evidence of prehistoric house pits just beneath the thick prairie sod. They did not expect to find a village here because there were no signs of buried cultural deposits along the cutbank. Furthermore, archaeologists had rarely found ceramic period villages along the upper reaches of such a small stream in the loess hills region.

Sherman Reservoir had been constructed during the early 1960s by the Bureau of Reclamation (Department of the Interior). Once the dam across the Oak Creek valley was closed, water levels rose and gradually began to cut into the surrounding prairie-covered hills. In recent years, wave action during late winter and early spring erode from three to five feet of the shoreline each year. In such cases, soil erosion is a “mixed blessing” because it not only reveals long-buried, archaeological evidence but it also ultimately destroys the very important context for such artifacts and ecofacts (pollen, charcoal, burned plant remains, and animal bones) that are essential for interpretation. Such extensive soil erosion threatens archaeological sites at Sherman Reservoir, as well as other lakes throughout the Great Plains.

Consequently, the Bureau of Reclamation provided funds for the excavation of two prehistoric houses at the Felis Concolor Site (25SM20), as well as periodic monitoring of select areas near Sherman Reservoir and the associated Arcadia Diversion Dam and canal system. We had determined by means of soil cores, shovel tests, ground-penetrating radar, and a subsurface magnetic survey that there were seven house pits and a number of associated food processing or storage pits within 0.6 acres. Later, we observed one additional house pit in the cutbank.

Last summer the Nebraska Archaeological Survey began excavations at this village location now known as the Felis Concolor Site (25SM20). We selected two house locations that were destined to disappear into the lake within the next decade. The two house pits that we excavated were quite different from one another.

The most substantial structure had been constructed within a one meter deep, oval-shaped pit. The floor area equaled 14 square meters and is quite small in comparison to other prehistoric lodges. We believe that this structure had been a small, dome-shaped lodge with an extended entryway “tunnel.” The floor lay more than one meter below ground. Earth from the pit had been piled upon the sloping outer walls and the roof to provide insulation. A central hearth provided heat and was also used for cooking. The long entry passage probably served as a “cold trap.” Earth-covered pithouses like this one are known from other regions throughout the world where the winters are cold and there is also a need to store food within the house. Based upon world-wide comparisons, we estimate that this house may have been occupied by up to six people. This lodge contained only one small bell-shaped storage pit near the back wall. We uncovered fragments of pottery vessels, animal bones, and other debris scattered upon the lodge floor near the doorway, as well as within the entryway “tunnel.” We believe that the evidence suggests that the house was occupied for a very brief period of time.

The second house that we excavated was less substantial. It may have been a summer residence or shelter since it lacked roof support and wall posts, a central hearth, storage pits, and an entryway “tunnel.” It is not uncommon to find paired winter and summer houses in prehistoric and historic Indian villages in the Midwest and the Southeast. Local resources were sufficient to support settlements year round. Paired seasonal dwellings would suggest families would not move on a seasonal basis but would, instead, change houses perhaps due to contaminants, pests, and/or hot weather. By analogy, we recall that EuroAmericans “moved” to porches and detached summer kitchens in the Midwest and the Southeast for similar reasons. This “summer house” also contained a sheet of refuse over the central floor area. There were very few stone tools like arrow points or hide scrapers; and, these tools were quite small after a number of episodes of breakage and resharpening. The animal remains were scarce in both houses. There were bison, deer, rabbit, bird, fish, and shellfish present in very limited quantities. A large two meter deep storage pit near the northern end of the village contained very little refuse.

Although everyday tools and implements were very rare, the most frequently occurring artifacts were bone and shell beads. More than two dozen beads were found during the screening of the dirt through fine-mesh screens. The bone beads were short sections of bird or small mammal bone that had been scored, snapped, and finished into one to two centimeter long tubes. Five articulated beads were found in the “summer” house suggesting that they had been lost or discarded while still strung together.

In the fall, we submitted two wood charcoal samples from the “winter house” to a radiocarbon dating laboratory. The results indicate that this earthlodge was occupied circa A.D. 1280-1300. Once our initial curiosity was satisfied about the age of the village, we found that this village was probably inhabited by a prehistoric Plains group during the same time period that western Nebraska was experiencing a “mega-drought” that lasted 38 years between A.D. 1276-1313. In the 1940s and 1950s, Harry Weakly had reconstructed drought sequences for the Ash Hollow area based upon tree ring studies or dendrochronology. His research suggested that there had been 87 drought years during the 218 years between A.D. 1260-1438. We need to learn more about the geographic area that this drought covered and how its effects varied across the sandhills and the loess hills of Nebraska.

At this point in our studies, we suspect that the seemingly nondescript characteristics of the Felis Concolor or Mountain Lion village may, in fact, be distinctive signs of drought-related stress(es). The ephemeral nature of this small settlement may actually reflect human responses to long-term, severe drought unlike any droughts known from recorded history. Ecologists have described the various ways that extreme environmental conditions shape the adaptations of plants and animals. We are hopeful that the archaeology of the Felis Concolor Site may reveal new insights into the lives of prehistoric Plains people and how they adapted to the extreme environmental conditions that existed more than 700 years ago.