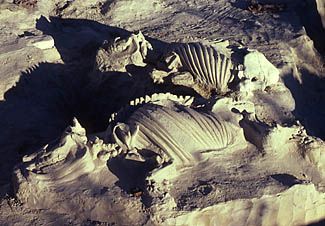 Teleoceras was a short-legged, barrel-bodied rhino that may have spent considerable time in the water like modern hippos. Complete skulls of any fossil animal are unusual, but finding articulated skeletons is quite rare. These specimens, from Ashfall Fossil Beds in Antelope County, are the most complete and well-preserved Teleoceras skeletons in the world! 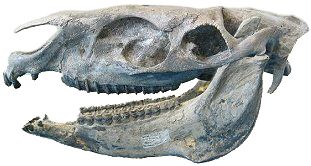 For most of its existence, Pliohippus had three functional toes on each foot. By twelve million years ago, however, the side toes became more and more reduced. At the Ashfall Fossil Beds near Orchard, Nebraska, some members of this group still had three toes, but many had lost the side toes all together. Reduction of side toes is an adaption to open spaces and solid ground, and allows an animal to move quickly to avoid predators.

Like rhinos and camels, crowned cranes might seem out of place in Nebraska. Though there is no evidence that the crowned crane originated in Nebraska, it was certainly present in the state 12 million years ago. Today, crowned cranes are limited in range to Africa, and are the only cranes that do not migrate.