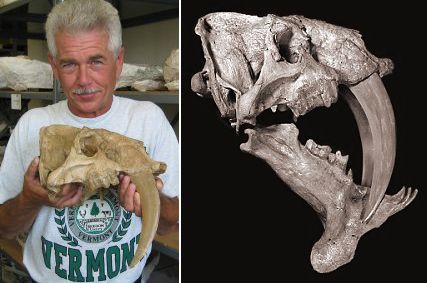 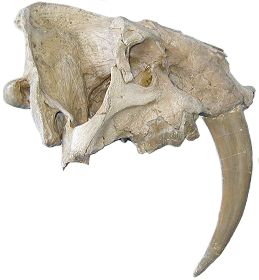 Barbourofelis was one of the most specialized carnivores to ever roam Nebraska. The eight inch sabre tooth and scissor-like shearing teeth meant that Barbourofelis didn't much bother with chewing...just ripping and slicing...and swallowing! The lower jaw had a flange to protect the protruding upper sabre and efficient "grabbing" teeth (incisors) in the front. So, what did he eat? Anything he wanted!! 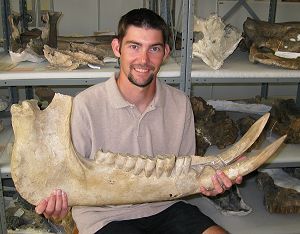 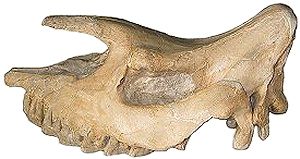 Aphelops was one of the largest of the many species of rhinoceros that have lived in Nebraska. Huge tusks in the lower jaw (left) may have been used for defense or for ritual fighting with other members of its species. The tall vault to the back of the skull, modified for the attachment of strong muscles extending from the neck, give the skull the unusual saddle-shape typical of this rhinoceros. "Rhinoceros" means "nose-horn", but not all rhinos had horns. Lack of a horn gave this rhino its name! 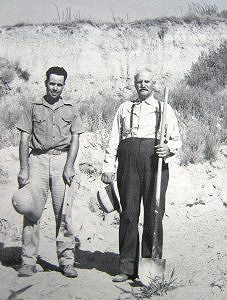 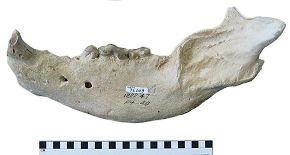 Indarctos was another large predator that called Frontier County home. This lower jaw is about 41 centimeters long...that's close to 15 inches! Unlike Barbourofelis, Indarctos chewed its food...a lot! The deep, massive jaws are well-equipped with broad, blunt teeth especially suited for crushing. Like today's bears, this animal was adapted to eating a variety of foods. You might call him a Miocene garbage disposal...but not to his face! The photo on the left shows crew chief Allen Graffham (left) and site discoverer Alex Keith, for whom this bear was named. It was the first Indarctos ever found in Nebraska.