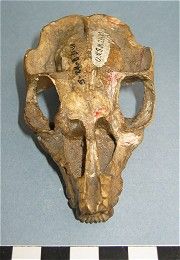 Sespia marianae was collected from deposits in Morrill County by former Museum Director and oreodont specialist C. B. Schultz when he was a UNL student in 1931. He named this new species in honor of his wife, Marian Othmer Schultz, who helped Dr. Schultz with his oreodont research. Oreodonts were a very diverse group of mammals which adapted to a wide range of habitats. Oreodonts became extinct about 10 million years ago, after a long successful reign in Nebraska. 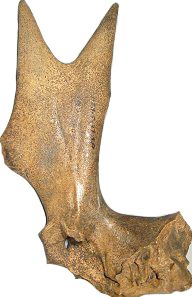 The name Sphenophalos is derived from the Latin and Greek words meaning "wedge head". This animal's skull (below) sports a pair of stocky "horns" who's prongs form a distinctive wedge. The species name "middleswarti" was given in honor of T. C. Middleswart, a collector for the museum and early member of the Highway Salvage Paleontology program. 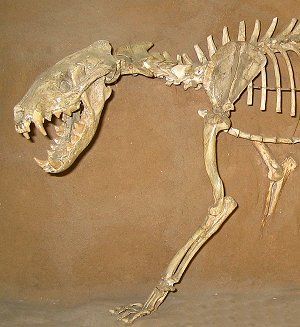 In paleontology, new species are usually named using the classical languages of Latin and Greek, however this is a tradition, not a requirement. Names that are chosen are often descriptive, but they may also honor notable people or places. Paleontologist J. R. MacDonald has named several new species of fossil vertebrates from the Great Plains using the Lakota language to honor the Native American tribes whose history is such an important part of this region. In Lakota, Sunkahetanka means, literally, "large toothed dog." Who could argue with that description of this critter?