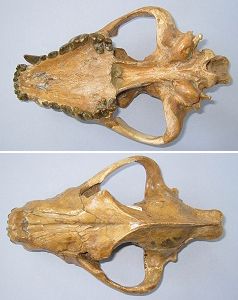 Aelurodon platyrhinus was a member of the canid or dog family. The genus Aelurodon was the most abundant of the medium-size carnivores of the Middle Miocene. Less specialized than the cats and the "bear-dogs", Aelurodon was somewhat similar to modern dogs...but some species were quite a bit larger. Merycodus may have been a popular meal for Aelurodon. It takes a large number of prey to support any carnivore population, and fewer than one carnivore fossil is found for every hundred herbivores. Aelurodon means "cat-toothed", so called because this dog had an extra cusp on the slicing tooth in the upper jaw, like cats.

Primitive "deer" diversified in the Miocene to include some very odd forms. This species, named for famed fossil hunter and paleontologist Morris Skinner of Ainsworth, had two "horns" over the eyes and a single "horn" on the back of the skull. Cherry County was Morris' favorite fossil hunting ground, and it was also a favorite haunt of Cranioceras. 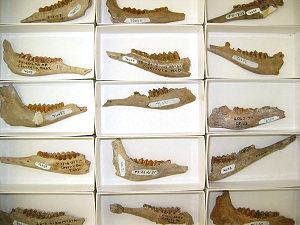 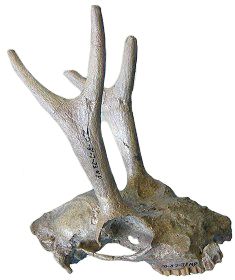 Merycodus was the common pronghorn "antelope" of the Middle Miocene of Nebraska. Rocks of this age are especially well exposed in Cherry County. The jaws and pronged horns of this grazing herbivore are often found, but complete skulls and horns are rare. Huge herds of pronghorns must have roamed the plains of Nebraska between 13 and 16 million years ago, just as they did in pioneer days.