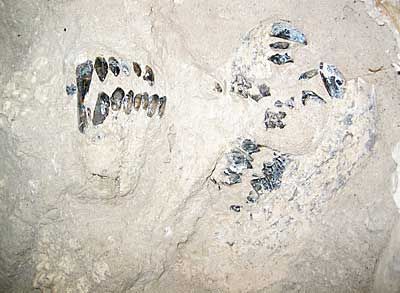 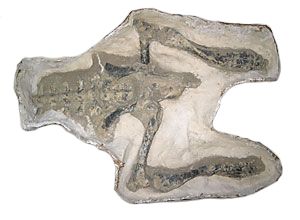 This large block of sandstone contains three complete and articulated skeletons of the oreodont Merycochoerus. The hindquarters of one (left) has been partially prepared, and the skulls of two others (below) are beginning to appear as preparation on the big block continues. This important specimen was found at the same site as Stratimus strobeli, but 23 years latter! Regular monitoring of sites is an essential element in preserving Nebraska's fossil heritage. 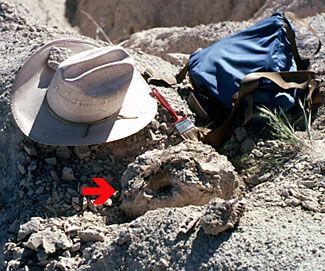 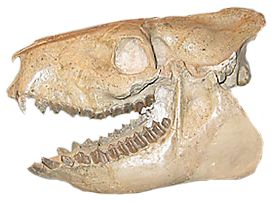 This nicely preserved skull of Merycoidodon was collected in 1968 in Dawes County. Even though oreodonts were among the most common mammals in Nebraska during the Oligocene, that doesn't mean they aren't important. What makes a fossil important? Can you tell the difference between a scientifically important fossil and a scientifically unimportant one? Find out! 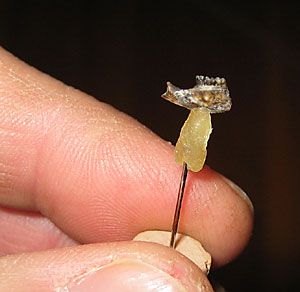 On the Dawes County page, this jaw of Strobel's paved road mouse looks about as large as an oreodont, but as the picture at left shows, it is really quite small. Microfossils such as this are very important indicators of the ancient climate and habitat. This new species was discovered by staff of the Highway Salvage Paleontology program, a joint effort between the University of Nebraska State Museum and the Nebraska Department of Roads. Stratimus strobeli was named for Jerry Strobel, director and state engineer of the Nebraska Department of Roads from 1987 to 1991.