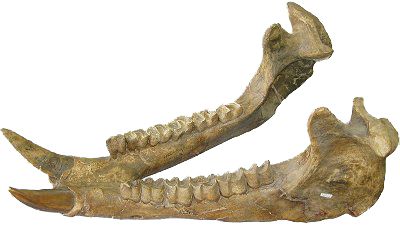 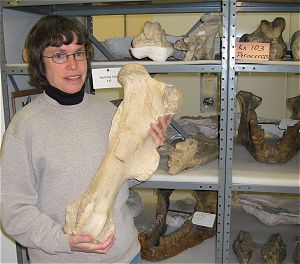 Peraceras was another of the large rhinos that inhabited Nebraska during the Miocene. Sediments in Banner County have produced a wonderful sample of these animals. Nebraskan scientist and author Loren Eiseley wrote about his 1930s experiences working these Banner County sites in his book The Night Country. Above, preparator Ellen Stepleton holds a femur (thigh bone) of Peraceras. She is standing in front of shelving units holding many additional rhino specimens from Banner County. 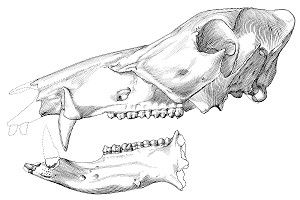 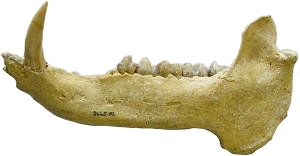 With canine teeth like this, you might think that this jaw belongs to a vicious carnivore, but it doesn't! Sometimes large canines are for defense, rooting for food, or simply display, rather than for capturing prey. Peccaries have rounded cusps on their molars, an adaption for a varied (omnivorous) diet. Human molars and peccary molars are quite similar, a fact that years ago misled some people to think that they had found a 10 million year old human fossil in Western Nebraska (oops, it was just a peccary!) 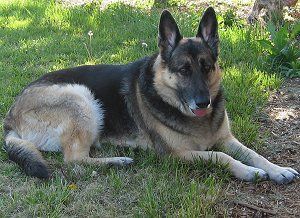 Aelurodon was a common carnivore during Miocene times and is found in most deposits of this age across Nebraska. It may have looked much like a German shepherd (left) or wolf and probably had a similar life-style. Unlike the modern wolf, however, Aelurodon was not the "top dog" of it's time. Canids have been important predators in North America for more than 40 million years.