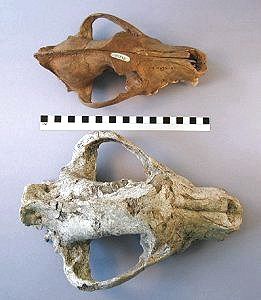 The genus name "Epicyon" literally means "Top Dog". Few would argue that Epicyon haydeni wasn't the Top Dog of Keith County! Compare the skull of an historic wolf from Webster County (left, top) with that of the fossil Epicyon from Keith County (left, bottom). Epicyon was a massively built predator that specialized in crunching both flesh and bone of its prey, leaving little behind for those lower down on the food chain. The site which produced this skull also contained numerous bones of other animals...most had been chewed beyond recognition. 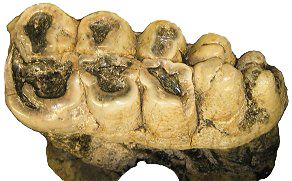 These molars of four-tuskers were recovered by a SCUBA team from the University of Nebraska State Museum Research Divisions. The teeth were found twenty feet under the surface of Lake McConaughy where they were slowly eroding out of the bedrock. Amazingly, they were still in excellent condition after years of submersion. 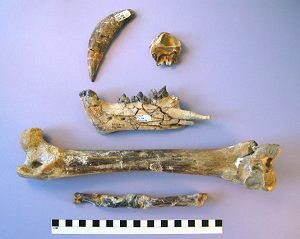 Nimravides was amoung the largest active predators of its time in Nebraska. It was actually larger than the "Top Dog" Epicyon, but less robust and with longer legs. It was built for speed and ambush, and its jaws were furnished with long canines and well developed slicing teeth for cutting flesh from its prey. At left are an upper canine tooth, an upper slicing tooth, the lower jaw, thigh bone and toe from this large cat. The scale is 25 centimeters, or nearly 10 inches, long!