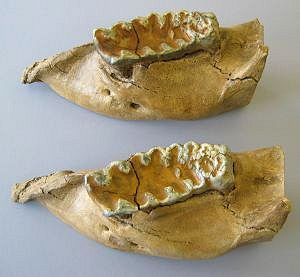 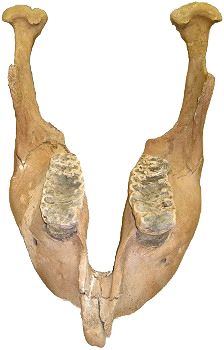 Twins? Seeing double? No, these are casts (exact reproductions) of the jaw of the Hitchcock County Stegomastodon. These unique elephants became extinct about 1 million years ago. This may have been the last of his kind to roam the Nebraska countryside. This specimen, consisting of a nearly complete skeleton, was donated by Jerry and Jan Williams. 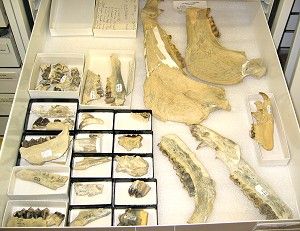 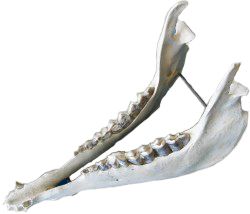 "Proto" means "first", but this isn't really the first camel to live in Nebraska. Primitive camels nearly 40 million years old have been found in western Nebraska. Protolabis was one of the smallest of several species of camel that lived in Hitchcock County 12 million years ago. It was actually an early llama...and yes, modern llamas are in the camel family! The jaws and teeth of other camels from Hitchcock county fill several drawers in the Research Collections of the State Museum. 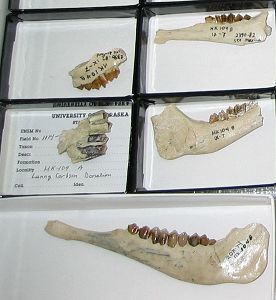 Ramoceros hitchcockensis is an unusual antelope-like animal with asymetrical horns--that is, the "rack" on one side is very different from that on the other side. Specimens of this animal were first collected for E. D. Cope in the late 1800s in Hitchcock County, Nebraska. Jaws and teeth of Ramoceros hitchcockensisare relatively common, but complete skulls with horns, like this one collected by the State Museum in 1982, are almost unknown!