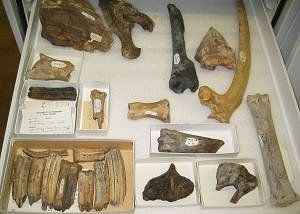 Horses originated in North America, but became extinct here about 10,000 years ago. Equus, the modern genus of horse, was widespread in Nebraska during the Pleistocene, and its fossil remains can be found in many of the creeks and streams that flow through Lancaster County. All horses in North America today are descendants of horses reintroduced here from Europe in historic times. 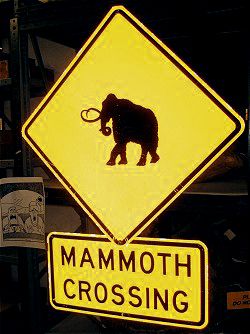 Long before the city of Lincoln was dreamed of, before humans had even set foot here, mammoths roamed the plains in Lancaster County. Their teeth, the most durable part of their skeletons, are preserved in the Pleistocene sediments that cover the county. They are often found in stream beds, gravel pits, and even farm fields throughout Nebraska. If mammoths had survived until today, and still lived in Nebraska, the sign at left might be a common sight along our highways (sign courtesy of the Nebraska Department of Roads)