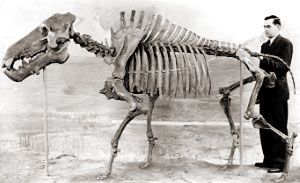 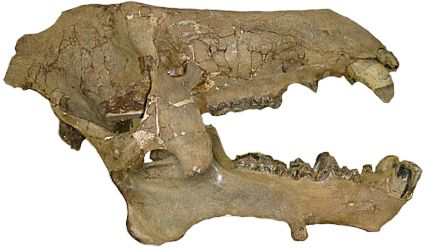 Henry Reider, State Museum preparator from 1928 to 1964, finishes the mount of Dinohyus hollandi from Agate Fossils Beds which he installed in Morrill Hall in 1929. Dinohyus is an artiodactyl (even-toed hoofed-mammal), a group that includes bison, camels, goats and pigs. Because this animal had generalized, pig-like teeth, early paleontologists believed it was related to pigs. Because of its size and fierce appearance, the name they gave it was "terrible hog"...or, in Latin, Dinohyus. We now know that it really wasn't a pig!

Although not related to hyaenas, this ancient carnivorous critter certainly made a similar impression upon it's discoverer. Teeth of these animals often display strange and extreme wear, indicating that their diets probably included bone. Hyaenodonts are members of a group known as creodonts. This specimen, which was finally freed from its thick shellac coating in 2004, well illlustrates its bizarre dentition. 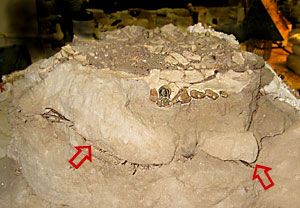 The oldest known dens of large carnivores found anywhere in the world were discovered at Agate National Monument in 1981. This crushed skull of a 19-million year old beardog was the first carnivore found in its den, seen here in profile (arrows show edge of burrow). Beardogs became extinct about 9 million years ago, but once roamed all parts of Nebraska, and were common throughout North America.