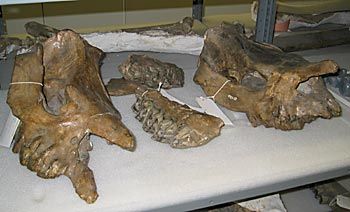 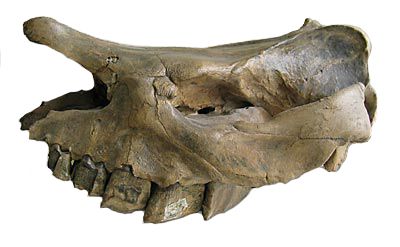 These rhino skulls from Brown County are some of the first fossils ever collected by Morris F. Skinner and James H. Quinn of Ainsworth, Nebraska. When the two young men contacted E. H. Barbour of the University of Nebraska State Museum about their finds, their lives would change forever, as would the scientific legacy of Brown County!

The "Quinn Rhino Quarry", in the Merritt Dam Member of the Ash Hollow Formation where volcanic ash dates range from 10.5 to 11.5 million years, became the starting point for the long and brilliant career of one of Nebraska's premier paleontologists. Teleoceras major, as Skinner and Quinn's rhino would later be named, is the same species as preserved at the Ashfall Fossil Beds in Antelope County. Two skeletons of this Brown County rhino are on display in Morrill Hall.

This gopher tortoise (Gopherus oelrichyi) died in its burrow 3 million years ago. It was found north of Ainsworth by paleontologist Morris Skinner in 1989. Nebraska is too cold for such large cold-blooded land animals today, but in the middle Pliocene the climate apparently was much warmer. Gopherus oelrichyi had a strongly-ornamented carapace (below) and plastron (left) and a very small skull (also left). 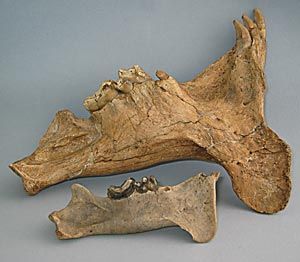 This beautiful jaw of Barbourofelis whitfordi (below) was collected by A.C. Whitford while he was a student at the University of Nebraska studying geology and paleontology under E.H. Barbour. It came from rocks assigned by Morris Skinner to the lower part of the Merritt Dam Member of the Ash Hollow Formation. This very rare leopard-sized predator is the geologically oldest species of North American Barbourofelis--a migrant from Asia. Nebraska specimens document the evolution of barbourofelids in North America: about three million years later, Barbourofelis fricki (top left) was about twice the size and eight times the weight of its predecessor!