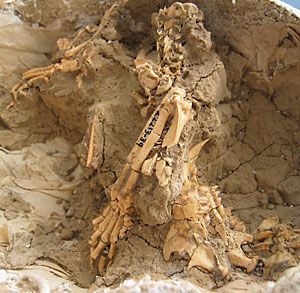 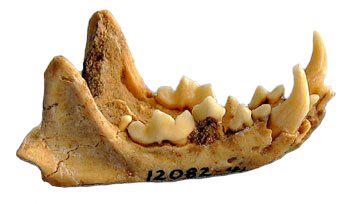 Many of the mammals living in Nebraska 10-20,000 years ago were the same species as those living today. The black-footed ferret is now an endangered species and the last surviving natural population is found in Wyoming. This fossil ferret is from what is known as the "Citellus Zone", a layer of silt so named because of the abundance of the ground squirrel (Spermophilus richardsoni) that once bore that name. Ferrets feed predominantly on burrowing rodents, and with the decline of ground squirrels and prairie dogs in Nebraska, the black-footed ferret no longer lives in the state. 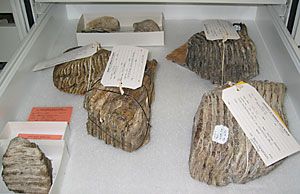 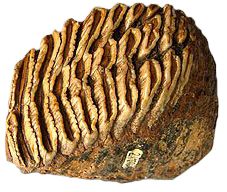 The most durable part of any mammal are its teeth, even when the mammal is as large as a mammoth. Even large bones and tusks deteriorate rapidly when exposed to weathering, but tooth enamel often remains when all other parts have turned to dust. The wind-blown silts of Lincoln County have produced a fair number of mammoth teeth over the years. 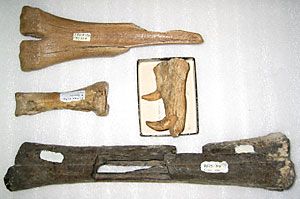 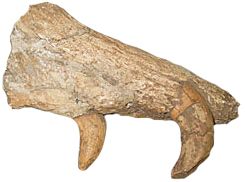 Although these teeth look pretty formidable, they actually belong to a camel named Camelops. The specimen below is part of the snout (premaxilla) of a large male camel from the loess (wind-blown silt) deposits of Lincoln County. Several other Camelops bones are included in the collection from the county.